Parking near the centre of Bologna to be able to visit the city quietly is not easy. Fortunately, Parkimeter is committed to solving these types of problems.

The QUICK - Bologna Policlinico car park is located in the Porta San Vitale area, near the historic centre of the city, an ideal place if you do not want to have to suffer all the traffic from the centre of Bologna. Park there and visit the Porta San Vitale or head for the city centre, where, in less than 20 minutes on foot, you can visit the city's most emblematic monuments: the Torri di Bologna, the Palazzo Garagnani or the Cattedrale di San Pedro.

In addition, the QUICK - Bologna Policlínico car park is a covered and guarded car park, your car will be safe while you walk around the city. It is also close to the S. Orsola-Malpighi Hospital and only 10 minutes from the University of Bologna - book your parking in Bologna with Parkimeter and enjoy the city!

When you arrive at the car park, hand over the vehicle keys to the Quick operator, who will park it. Then, go to the control room with the correct Parkimeter, the staff will validate it and give you a receipt.
When you return, give the operator the booking form with the receipt. 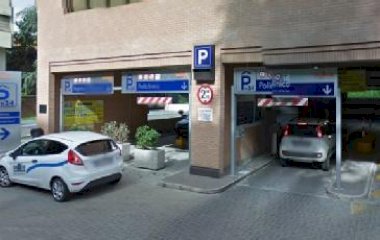 Please provide your dates to show you the best price possible