Adolfo Suárez Madrid-Barajas Airport is located in the northeast of Madrid, in the district of Barajas, 12 kilometers from the center. It has four terminals and it is the first Spanish airport by passenger traffic, air cargo and number of operations.

Adolfo Suárez Madrid - Barajas Airport, formerly Madrid-Barajas Airport, is located about 12 kilometres from the centre of Madrid, in the north-eastern part of the Spanish capital.

The airport is referred to by International Air Transport Association (IATA) codes: MAD and International Civil Aviation Organisation (ICAO) codes: LEMD. Owned by AENA, it is the largest Spanish airport in terms of passenger traffic, air cargo and number of flight operations.

How to get there

There are several ways to reach Adolfo Suárez Madrid-Barajas Airport, either by public transport or private car.

Taxis in Madrid are white with red stripes and the coat of arms of the city hall on the front door. Several taxi ranks scattered around the airport terminals outside the arrivals hall. The taxi cost from the airport to the centre of Madrid is 30€ per one-way trip, regardless of the number of passengers and distance travelled.

If the destination is in the area outside the M-30 ring road, the fare is 20€ for journeys of up to 10 km. After 10 km, the taximeter will continue to calculate the corresponding tariff. The transport of guide dogs and pets, if they travel in an approved carrier, is free of charge, as is the transport of luggage, if the capacity of the luggage space and the roof rack allows it.

Adolfo Suárez Madrid-Barajas Airport connects to nearby cities by an extensive public transport network of city and regional buses. There are bus stops at all terminals, but not all lines stop at each terminal.

The airport is connected to the centre of Madrid by city buses of the Empresa Municipal de Transportes (EMT) on lines 200, EXPRÉS-203, N27 EXPRÉS, and 101.

Taking the bus to the Airport

Madrid has a transport service called Line 203 or "Airport Express" connecting the city centre (Atocha by day and Cibeles by night) with Barajas Airport. The line, with yellow buses, runs 24 hours a day, every day of the year and takes about 30 minutes (to T1, five minutes to T2 and another five minutes to T4). It runs every 15-20 minutes during the day (from 6 am to 11.30 pm) and every 35 minutes at night (from 11.30 pm to 6 am). The fare is 5 euro, to be purchased in the bus itself.

The starting point of the service is T4. There are stops in T2, T1, O'Donnell (at the junction with Doctor Esquerdo), Plaza de Cibeles (the hub of the EMT's night services EMT, the búhos) and Atocha station (operating between 06:00 and 23:30). At night, the stop is in the centre of Madrid (Plaza de Cibeles), and the bus is called N27 Exprés Aeropuerto.

The terminal T4 of Madrid Barajas Airport is connected to Madrid by line C1 of the local train network Cercanías Renfe.

The price of a single ticket is 2.60 €. The ticket has a duration of 2 hours from the moment of delivery and is free for those with an AVE train ticket who have to change flights.

The train goes every 30 minutes and arrives at the airport station. This station is located on terminal T4 floor -1. To get to other terminals, you need to take the shuttle bus that connects from this terminal to the other terminals.

Madrid's metro network also takes you from the city centre to the airport. Línea 8 connects the Nuevos Ministerios station with the airport terminals in 20 minutes.

There are two stations at the airport, serving the old terminals (Airport T1-T2-T3, located in Terminal T3) and the new terminal area (Airport T4). There is a €3 surcharge for boarding and alighting at both stations, purchased separately or added to the accompanying ticket. Users with a transport pass or tourist pass do not pay an airport surcharge.

Between the stops "Aeropuerto T1 T2 T3" and "Aeropuerto T4", the metro makes a stop at the "Barajas" stop. This stop is not part of the airport.

The service is available every day from 6:00 am to 11:30 pm. Tickets and fares can be obtained from Consorcio Transportes Madrid.

Madrid-Barajas Airport has connections to the Madrid ring road and the main roads coming from all directions: M40 and M40 South, M11, A1, A2 and R2.

The easiest and fastest route to Madrid-Barajas airport is usually via the M-40, direction A-1 or A-6.

You will find the official AENA car park at the airport itself, although it has much higher prices than other parking services you can book online. There are basically three options for parking at the airport

Parkimeter allows you to compare the prices of different services to decide which one suits you best. 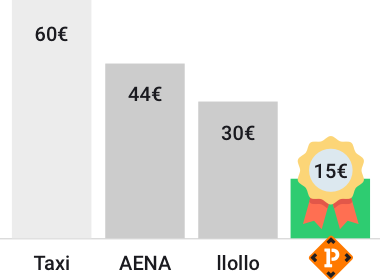 *Comparison of a two-day stay in one of the Parkimeter car parks versus two days in the cheapest official AENA car park (long stay), two days parking with llollo (as of 27/3/17) and a return trip by taxi from the city centre.

The price difference in parking with Parkimeter compared to other options is already big for one day. Still, by booking for several days or weeks, the price per day drops, and in some cases, you can even get a saving of 80% compared to the price for one day.

We also have car parks all over the city, in more than 70 locations in Spain.

To increase the airport's capacity to 70 million passengers per year, the so-called Barajas Plan was launched in 2000. This macro-project culminated six years later with constructing a new terminal area, which includes the current T4 and its satellite building, T4S, reinforcing the airport's importance as a global hub.

Adolfo Suárez Madrid-Barajas is Spain's largest airport in terms of passenger traffic, air cargo, and flight operations. According to the 2014 traffic data from the agency Eurostat, it is the fifth-largest European airport in passenger numbers. It is the 15th largest airport in the world according to the Airports Council International (ACI) annual report of August 2015, with more than 29.5 million passengers per year in 2014.

Barajas Airport consists of four terminals, a satellite building and two docks, an Executive Terminal and another terminal dedicated exclusively to cargo.

Terminals T1, T2 and T3, have six boarding areas: A, B, C, D, E and F, which are connected to the terminals. Terminal T4 and its satellite, T4S, are connected by an automatic underground train.

The fastest and most comfortable way to park in the airport. The driver will be waiting for you at the scheduled time at the terminal. At your return, call the driver, who will deliver your car to you.

The cheapest option: free 5-15 minutes transfer to the terminal. A free shuttle will bring you from the parking lot to the terminal and back when you return.

The official parking inside the airport facilities. It is normally at walking distance from the terminal, but cheaper long stay parkings sometimes require short transfers.

Learn all the tricks and tips for Park in Madrid